My wife thinks I have problems, but I'm pretty giddy about my new tool pouches I bought today. I used to have a good leather set that got stolen a few years ago, then for the last few years I was making due with big box pouches. Inevitably I bust something on the big box crap every few months and I was getting sick of replacing stuff all the time. I decided it was time to go pickup another set of quality stuff that gonna last a long time. 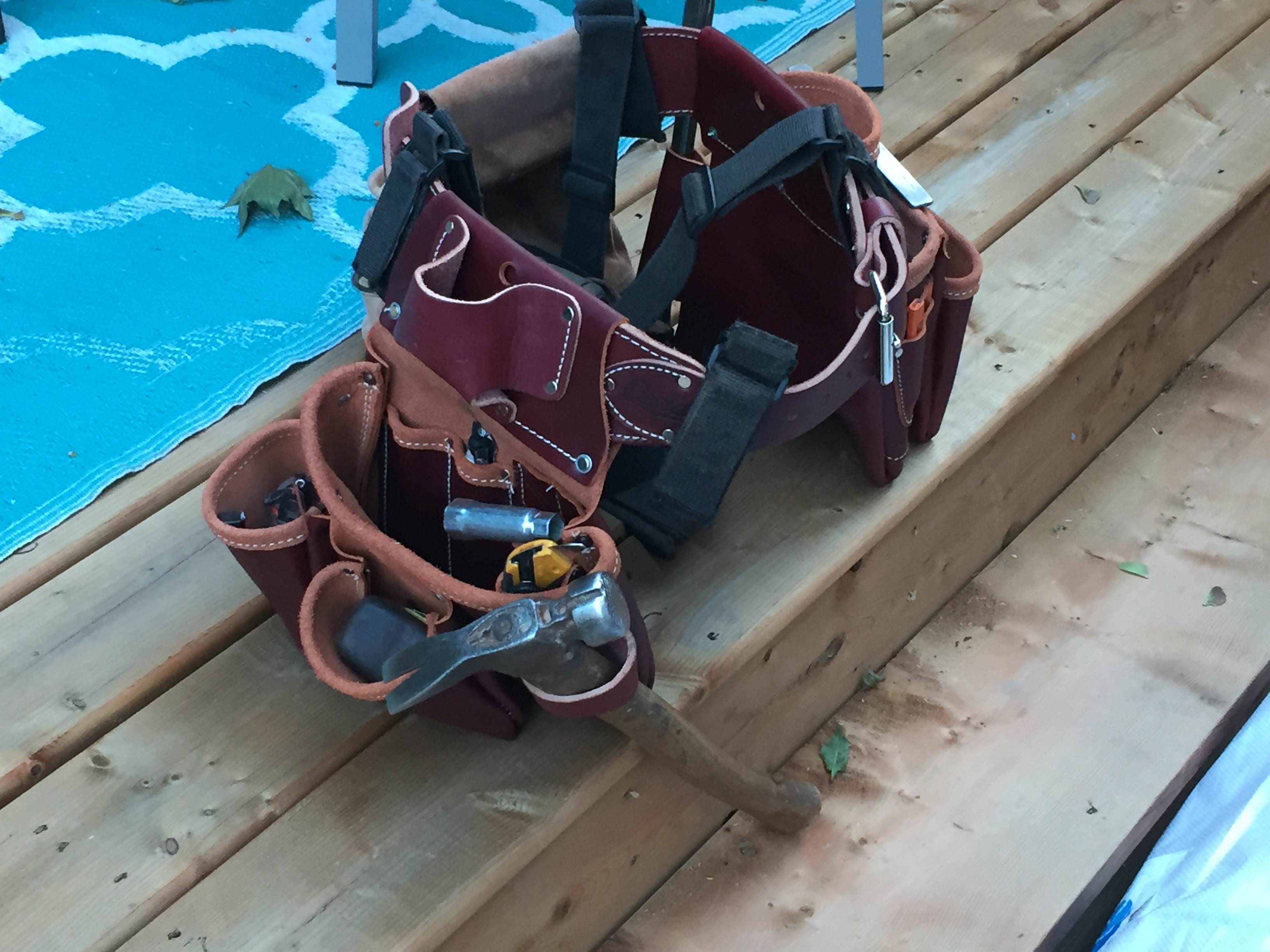 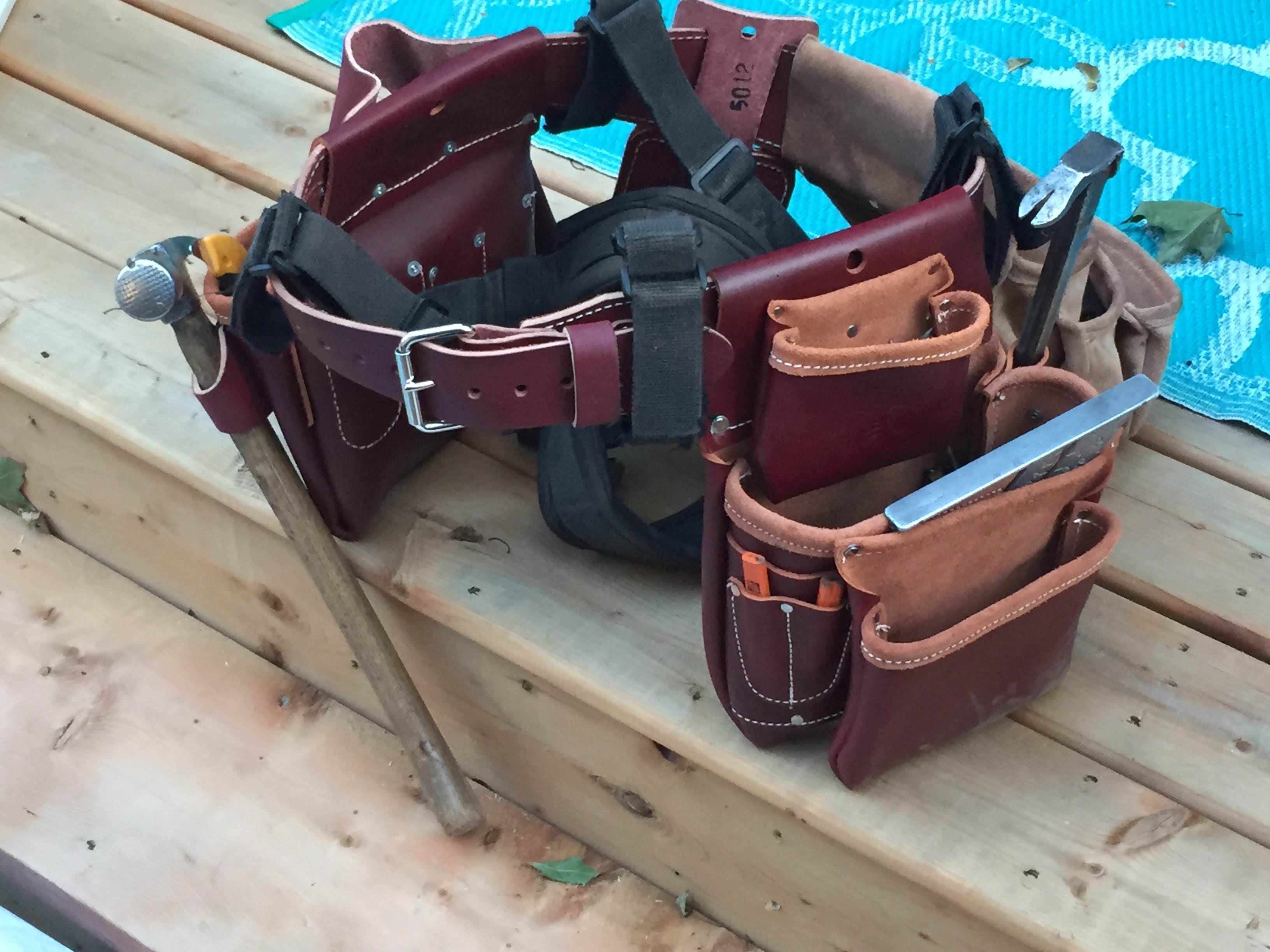 If you're curious they're Occidental Leather Pro-Framer pouches (except for the ugly brown one in the back, but that's just for holding plans so it doesn't break). They weren't exactly cheap ($400 for two bags, a belt, and a hammer holder) but they're feel pretty damn rugged and I hear nothing but ridiculously good things about them. As it was I'm spending like $150 a year on big box crap pouches that break constantly anyway so these will be a good investment if they make it past 3 years. My boss has a set of them that's lasted 7ish years at this point so I'm pretty confident they're worth every penny.

Oh and I have to give a shout out to my beautiful beast of a hammer! I thought about replacing her today but it was honestly breaking my heart to even contemplate that. There's nothing wrong with her she's just old. Besides I wasn't looking for a 'new' hammer, just getting another one of the same thing I already have. She's a Vaughan 23oz with the 17" axe handle if you're curious. Best hammers ever made (for framing) IMHO. Someone bought me one of those Stiletto titanium ones a few years ago for christmas. I used it for a week or two and it's been collecting dust and cobwebs in the garage ever since.

Anyone else ever get so sentimental about a tool that you can't replace it? Everybody here's bound to have one, let's hear about them!
Top

Like you, I never had much luck with cheap pouches and despised the canvas ones. I made it a point to buy heavy leather pouches that were built well. My current belt is 20 years old if it's a day and it's still going strong. Now, granted, I don't use it every day anymore, but it was daily used and abused for the first 5 years of its life.

Personally, I like the metal hammer loop, it's a whole lot easier to find without looking for it or having to hold the loop open to insert the hammer. I'm also an Estwing fan, but I did mostly demo work and very little framing, so the more durable, all steel construction suited my needs better.

Now the million dollar question, do you know how to wear them properly?

I may start using the metal loop, but usually I had my cats paw on my backside in its own holder and the hammer on the front right. My cats paw holder doesn't fit the new bolt so it had to move. If I do switch the hammer spot to the back it'll be hard though, I know I'm gonna grab for the front right on instinct every time I go for my hammer then be like damnit.

I do have a massive 28oz Estwing that I like for demo stuff, but I need a wood handle for driving nails. I tried a lot of different hammers and without fail all the metal handled ones (even with the fancy 'anti-vibe' crap) give me tennis elbow. The Titanium one probably wouldn't either but 15oz doesn't feel right to me. It's not heavy enough to move things around (like smacking a wall into place, LVLs together, etc), and you have to swing it fast to hit hard. With the 23oz I can lazily two shot common nails without much effort, just letting the weight of the hammer do the work.

And of course I know how to wear the new pouches. You hang them on a hook in the truck while you sit in the drivers seat eating cheetos barking orders at new guys right? I mean plus you don't wanna get them dirty with sweat, sawdust, or cheeto dust.
Top

Nice belt. I had to get a new belt a couple years ago but mostly because the old one I had for likely 20 yrs seamed to have “shrunk” and no longer fit if I had to wear any layers in colder weather. As a youngster I cut the length off the strap never forseeing that that belt would last long enough for me to put grow it.
I also prefer the metal hammer loop as it is so much easier to use without effort.
I don’t see a “red bar” in that belt? What’s up with that? Lol
If you've found our videos or website information helpful, please considering making a donation using PayPal or pledging us on Patreon
Top

Years ago there was a new hammer to hit the market, it might be the titanium one you mentioned. I remember that it was gray and black because the maker was a football fan and "borrowed" his favorite team's colors. At any rate, it was feather light and felt really nice in the hand, well balanced. I was tempted to buy one, but, like I said, with the work I did, the Estwing was the better choice for my needs.

You're spot on with how to wear the belt!

It is now my preferred method whenever possible, though it seems that most times everyone seems hell bent on making me actually wear mine and get something done. I GC'd a major remodel a couple years ago for a friend and still ended up doing half the work myself.

So much for retirement.

No red bar but I have the black bar, which is 10+ years old. If you look really closely you can see how squashed out the head is. I like it because it's thicker and made of forged steel, really handy for when someone doesn't square their wall perfectly and I need to lift one end up to close the gap between top plates. I hope it never breaks since I haven't seen one like it in awhile, and the stainless steel ones seem more prone to snapping the teeth off.

I always have to get out and work too, nothing gets done right if you don't lol.
Top

Occidental is top of the line ! They make some really nice electrical pouches too.

I have a few pouches but really rarely use them now, I can trim out with just a small belt clip and keep a open top tool bag handy for the other tools.

But, being retired, I'm not too worried about efficiency these days

I used to have a belt with an electrician-style leather pouch when I worked at the phone company. Unfortunately, it belonged to the company, not me, even though I had used it for 5+ years. I miss that thing, it was all broken in like a good old baseball glove. All my tools fit inside it perfectly, too. It should have "disappeared" before I left the company. Oh well.
Top

Hmmmm you say the Stiletto titanium is collecting dust?
Ive got 50 bucks that will fix that problem if you like

I use the same cats paw and have gone through a few of them in the past 30 years. I like that it's double ended. I grind off the mushroomed head every once in a while, just so no shards come shooting at me when I'm using the thing.

I've never used a red bar either, I opt for the larger brother, the flat bar or "Wonder bar", though the one I use doesn't have the extra kink in the neck, it's just bent at a 90* angle. I've actually broken a few of these, which is one of the reasons I usually have a backup of every hand tool back in the truck.
If the women don't find you handsome, they should at least find you handy.
Top

DanM wrote: ↑
Wed Sep 19, 2018 4:25 am
No red bar but I have the black bar, which is 10+ years old. If you look really closely you can see how squashed out the head is. I like it because it's thicker and made of forged steel, really handy for when someone doesn't square their wall perfectly and I need to lift one end up to close the gap between top plates.


Yup I carry a cats paw as well, very good for pulling nails and takes all kinds of punishment being beaten by your hammer, prying or whatever. These are readily available at many places here and in different lengths. I have heard that the similar shinny ones are not as tough.
If you've found our videos or website information helpful, please considering making a donation using PayPal or pledging us on Patreon
Top

Ya the stainless steel ones are harder but a lot more brittle. They don't really deform much under stress they just break. I've seen a lot of guys at work snap the teeth off them, or break the 'wrist'. I remember one guy was trying to pry something near his face when the teeth on his bar snapped off, then he smacked himself in the mouth with the other end of the bar lol. Luckily he didn't snap his own teeth off in the process, just got a nice fat lip.
Top

I don't know why anyone would make or want an SS crowbar. SS is notoriously brittle and offers nothing to the qualities of the tool. If you've got rust issues with a crow bar, you've got bigger problems than SS is gonna fix!

Probably the same reason so much junk is made with cheap made in China plastic these days, price. I think the SS ones they just cast in a mold, do a little bit of work to deburr it and that's it. The forged ones take more work to make. I'm assuming they're forged by a machine, then heat treated, quenched, and tempered by someone relatively skilled, then someone has to sharpen the claws and deburr everything.
Top
Post Reply
14 posts • Page 1 of 1